Cornet Star is an emerging talent with all qualities for top sport
This young stallion stands out because of his attitude in the course and his positive character. He always shows a lot of flexibility, technique and ability in the course. He is also very popular with breeders because of his remarkable bloodline.
°2014 - grey - 1.68m - Hannover
​​​​​​​

Character
Cornet Star learns very quickly during his education due to his great will to work and his honesty. Moreover, he also has a lot of faith in the people, which makes him very easy to get along with. As a stallion, he is not dominant towards other horses and therefore does not cause any problems during training. He is sensitive to signals and careful while jumping but he is not afraid of the environment. Cornet Star has the ideal character and the right attitude to perform at the highest level.
Health
At the age of 2 he underwent a thorough veterinary examination for the Hanoverian stallion approval. No hereditary abnormalities were observed during both the clinical and radiological examinations, so he received the best score, class I.
Jumping skills
Just like his sire Cornet Obolensky, he shows much flexibility and power while jumping. He makes very regular jumps and develops a lot of power, so that the height of the obstacles plays little role for him. The attitude and character of his grandfather Quick Star makes him a super competitive jumper. 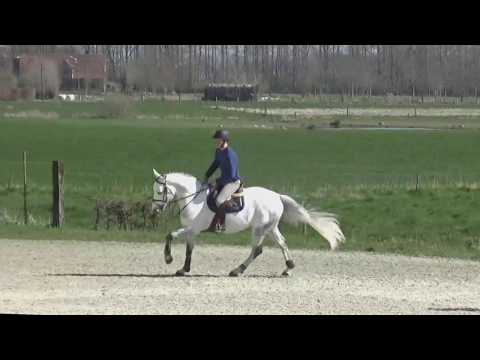 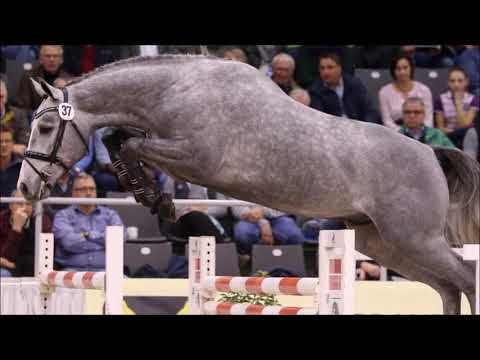 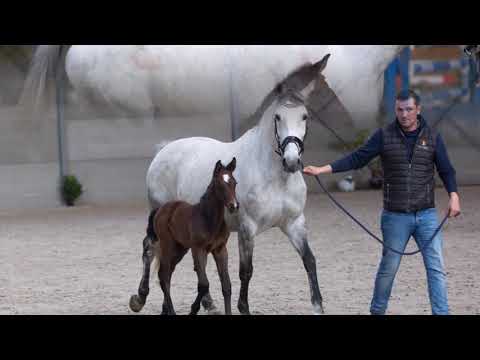 Cornet Star and foals @ Breemeersen stallionshow 2019
Cornet Star @ Belgian championship 5yo horses
Cornet Star @ final 6yo horses CSI Opglabbeek 2020
Performance
2019 (5 years old)
Selection Belgian Championship five-year-old horses
6 clearrounds during the Belgian cycle
3 out of 4 clearrounds during the Belgian stallion competition
2018 (4 years old)
Final of the Belgian Championship four-year-old horses
4 out of 5 clearrounds during the Belgian cycle
2 in 2 clearrounds during the Belgian stallion competition
2017
As a three-year-old, he has no sports performance yet.
2016
Cornet Star is approved as a 2-year-old stallion for the Hanover studbook and purchased at the auction by the Breemeersen studfarm.
Cornet Star was purchased by Stoeterij de Breemeersen on October 29, 2016 during the auction of the approved Hanoverian stallions in Verden.
There was already a lot of interest in this young grey stallion at the time because of his remarkable appearance but also because of his exceptional genetic predisposition.
Performance blood
Cornet Star has at least 11 direct ancestors in his pedigree who jumped Grand Prix level 1.60m: Cornet Obolensky, Clinton, Corrado I, Heartbreaker, Nimmerdor, Silvano, Ramiro, Quick Star, Galoubet A, Alme, Stella
The bloodline of this young stallion is very modern and offers a lot of certainty to the breeders. Due to his strong breeding, with Grand Prix horses in both the father line and the mother line, Cornet Star and his descendants are cut out of the right wood to perform at Grand Prix level.
A remarkable mother line!
Cornet Star has an incredible damline and that is demonstrated by the large number of Grand Prix horses that jumped 1.60m level.
The great granddam of Cornet Star is the Casino Boy xx daughter Channell I. This mare gave 13 foals of which three horses jumped up to 1.40m and three horses jumped up to 1.60m. One of these horses is the approved stallion Casanova, which is being bred by Paul Schockemöhle. From a daughter of this Chanell I also comes the approved stallion Camparino (by Chello), who also jumped 1.60m and stands at the Langestüt Schwaiganger in Germany.
The grandmother of Cornet Star is the mare ISIS VII (by Capitol I) who gave birth to four offspring including the mother of Cornet Star, R-Queen Elis (by Quickstar) who never came into the sport due to an injury. Her sister Samanta (by Quick Star) jumped successful up to 1.45m level.
When we go back to the great-grandmother Channel I we see that her half-brother Ligorett (by Lord) is at stud in Holstein and her half-sister Viola XI (by Caletto) is the mother of some remarkable jumpers. From Viola XI comes the Holstein-approved stallion Casado, the approved Zento (by Quasimodo) but also the world-famous Capitol I son CENTO who was so successful with Otto Becker.
Apart from very successful show jumpers, we also find a few outliers from that same dam line: the stallion Close Up VA (by Clarimo ask), the stallion Nekton (by Nimmerdor) approved for Hanover, which jumped 1.50m, the mare Dulcinea La Silla (by Diamant de Semilly) who jumped 1.60m, the mare Lamarque 7 (by Limbus) who jumped 1.55m and the mare Cerona (by Clearway) who in turn was successful at 1.60m.
Cornet Obolensky
From the first day that Cornet Obolensky entered the breeding world, the charismatic stallion has attracted riders and breeders. Breathlessly the audience watched at the Westphalian stallion show in 2001 how the product of the golden combination Clinton x Heartbreaker played with the obstacles. In the 30-day test, the phenomenal athlete scored a 9.24 for the jumping parts and a 10 for the free jumping.
The fascination for Cornet Obolensky's jumping force only increased from the moment that the stallion came under the saddle of Marco Kutscher. With dream figures, the couple qualified for the final of the Bundeschampionat. With great ease, they conquered the toughest courses in the world.
From the first crop sons of Cornet Obolensky, the top stallions Cristallo I (1.60 jump with Henrik von Eckermann), Cornado NRW (1.60 jump with Marcus Ehning) and Conte Bellini (the great discovery of the World Cup Final in Gothenburg in 2013 under the Let Kristaps Neretics) approved. The phenomenal crack Cornet d’Amour by Daniel Deusser also comes from the first year offspring of Cornet Obolensky. In 2013 this combination became German champion and individually finished fourth in the European Championship in Herning. Also from the first year of Cornet Obolensky are Marco Kutscher's current top horse Cornet's Cristallo and Emanuele Gaudiano's EC Crack Cocoshynsky.
Quick Star
The French jumping miracle Quick Star is one of the most legendary jumping stallions of the nineties. In today's showjumping horse breeding, Quick Star is among the best sires in the world, thanks to, among other things, the performance of its famous descendants. For example Stella, Quick Silver, Quick Lauro Z, Queen Z, Quebec, Utah Z and Quality Touch Z.
Meredith Michaels owes her international career to Quick Star. With the then 7-year-old stallion she started in Palm Beach and immediately won the Grand Prix. Then Europe followed with, among others, Maastricht, Munich and Mannheim where she also won the Grand Prix.
Meredith Michaels about Quick Star: "He was a phenomenon and with an unprecedentedly impressive appearance. He had springs under the hooves. ”Father Galoubet A managed to seize the Championship title as a 5-year-old at the national championships of France. In 1982 he won gold with the French team during the World Cup in Dublin.
Galoubet A is known as the father of more than 30 approved sons.
Dam Stella has also competed internationally by, among other things, gaining a second place in the Grand Prix of Stuttgart.